Share a memory
Obituary & Services
Tribute Wall
Donations
Read more about the life story of Margaret and share your memory.

Campbell, Margaret Helen (nee Fotheringham) of London, formerly of Kincardine, passed away on January 13, 2023, at London Health Sciences Centre in her 76th year after a brief illness. Predeceased by her husband Bruce in 1998, parents Richard and Erma (Faulkner) Fotheringham, and in-laws Clarence and Jeanetta (Inkster) Campbell. Also predeceased by her bonus-mother-in-law Marjorie (McLeod/McKay) Campbell and sister-in-law Margaret (Campbell) Smith.

Margaret will be deeply missed by her children Mary Jane (Joel) Anderson of Thamesford, Lisa (Ellard) Teeple of Thamesford, and Rob Campbell of Strathroy. “Nana” was so loved and will be missed by her loving grandchildren Cole Thynne, Ellie and Ryan Teeple, Aiden Anderson, Emmy, and Macy Campbell. Also mourning her passing is her bonus-daughter Amanda (Jesso) Overholt who joined the family 30 years ago through Big Sisters of London. Margaret is survived by sisters Evelyn (Craig) Fotheringham and Barbara Fotheringham; brothers-in-law Bert (Jo-Anne) Campbell and Ron Smith; and sister-in-law Beth Campbell.

Margaret began her career as a hairdresser before starting a family and taking on her role as a homemaker and mother on the Campbell family farm just outside of Kincardine. When the kids were older she took a job at the Bruce Tropical greenhouse where she enjoyed working alongside many friends, including her life-long friend Carol MacKenzie. After Bruce passed away, Margaret moved to Hanover to care for her mother and worked part-time at Rexall pharmacy. In 2013, the kids convinced Margaret to make the move to London to be closer to family and she remained there until her death. Margaret loved spending time with her kids and grandkids, and could often be found cheering them on at their games, dance recitals, and music showcases.

No service will be held. Cremation has taken place and a private family burial will be planned. In lieu of flowers and as an expression of sympathy, memorial donations to the charity of your choice would be appreciated. 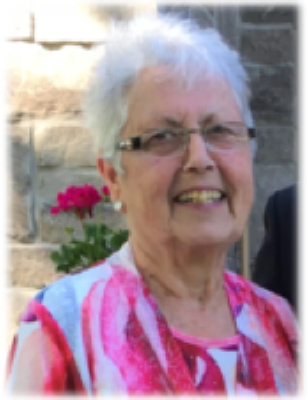 You can still show your support by sending flowers directly to the family, or by planting a memorial tree in the memory of Margaret Helen (Fotheringham) Campbell

Brock and Visser no longer accept CASH for donations.


We would be happy to help write a card of acknowledgment to the family on your behalf. For your convenience, we will have envelopes for the charity set out at the funeral home.
We apologize for any inconvenience.
Thank you!