Share a memory
Obituary & Services
Tribute Wall
Donations
Read more about the life story of Mollie and share your memory.

Hart, Mollie (nee Vann) - Passed away at Woodingford Lodge, Woodstock on November 25, 2022, in her 85th year.  Daughter of the late James and Betty (nee Jackson) Vann. Beloved wife of the late Gerald “Gerry” L. Hart (2022) for 63 years.  Cherished mother to Steven (Kelly) Hart, Jeffrey (Joann) Hart, late Charles (Sandi) Hart (2010), and Wendy (Warren) Clements. Proud grandmother (Grammy) to Rachel (Dale), Kristen (Matt), Danielle (Tyler), David (Malorie), Nicole (Mike), Carly (John), Katie (Kyle), and will always be missed by her great-grandchildren (who called her Noni) Sydney, Violet, Keira, Max, Bennett, Finn, Charlie, Declan, Liam, Knox, and Zoey.  To be continued…. Mollie will be missed by her sister Jill (Carl 2014) Chambers, her brother Jack (Esther) Vann, and her many nieces, and nephews. Born in Biggleswade, England, September 10, 1938. Mollie moved to Canada with her mom, dad, brother, and sister in 1952. She grew up in Ingersoll, Ontario, until she married Gerry on July 26, 1958. Then moved to Woodstock, Ontario. Mollie was a lifeguard and taught swimming at the YMCA and was a coach of the Junior Swim Team at the YMCA. She was also an avid tennis and badminton player. She was a member of the Craigowan Golf and Tennis Club. Mollie was a medical secretary and a legal secretary for many years. One of her other passions was marquetry, her talent made her family proud. Mollie loved to sing and was a Soprano in the New St. Paul’s Church and Woodstock Fanshawe Singers Choir. Cremation has taken place. Interment will be held at the Hillview Cemetery.  A celebration of life will be held at a later date.  If desired, memorial contributions may be made to the Alzheimer Society or the Parkinson Society may be arranged through the Brock and Visser Funeral Home, Woodstock 519-539-0004.  Personal online condolences at www.brockandvisser.com

The family would like to express their sincere thank you to the nursing staff and PSWs at Woodingford Lodge, for the exemplary care of our mother. 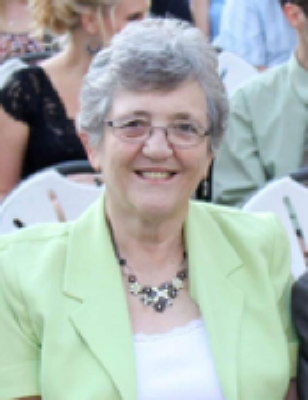 You can still show your support by sending flowers directly to the family, or by planting a memorial tree in the memory of Mollie Ann (Vann) Hart